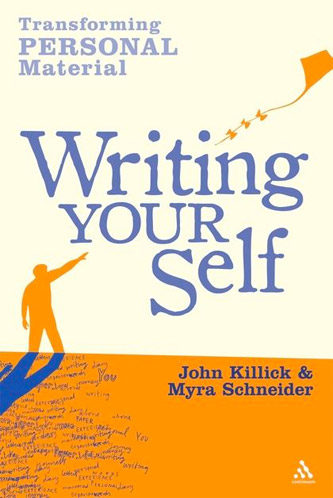 Writing Your Self is a comprehensive resource for anyone who wishes to explore personal writing.

In the first part, it examines how well and little-known writers use personal subject matter in memoirs, poems, journals and novels. A number of these, including the authors, have made contributions about how they tackled their own experience.

The second part offers techniques and ideas for different ways of approaching personal writing with many examples and includes chapters about developing and finishing work.

From the first section
CHAPTER FIVE: DISPLACEMENT AND DISABILITY

Life, for many people, is affected by some kind of displacement – a circumstance which has a profound effect on their lives, limiting it or forcing it into a particular direction. Very often this creates a problem but many individuals find ways of turning the negatives of their situation or condition into positives. In this chapter we shall look at different kinds of displacement: exile from the country of birth, separation from birth parents including adoption, and imprisonment which can be considered as an exile from freedom. We are also including disability in this chapter because the loss of a faculty or physiological impairment has a displacing effect.

Over and above the circumstances listed above many of us experience a sense displacement at some point in our lives as a feeling of not fitting in or of not belonging –  a need which is particularly strong in children. We begin by looking at Myra’s experience of this.

Just before World War Two my father, a government scientist, was transferred from the Admiralty in London to be the chief scientist at the torpedo factory in Greenock on the Firth of Clyde. I was three, unaware that I was leaving Hampstead Garden Suburb in London where my parents had a network of Jewish friends and nearby relatives. When I was of school age I was sent to the Greenock Academy which seemed a long journey from our house. It was an all-age school and I was daunted by its large nineteenth century buildings surrounded by high walls, also by the hundreds of pupils, many of whom seemed huge. Just being at the school filled me with a sense of fear. There was more to take on:

When I was six I learnt
according to the gospel of school
that Jesus Christ meek and mild
was the child of God,
so I was put out,
not to say ashamed,
when my parents gave me the news
that he was not my saviour… (from Insisting on Yellow, Enitharmon Press 2000)

From the same chapter

Tariq Latif is a poet who feels strung between two cultures. He was born in Lahore but has lived most of his life in Manchester. His poems look affectionately at the life he left behind. They also cast a sceptical and often perplexed eye over his adopted country. In a sequence, The Outsiders, which is in his first book, Skimming The Soul, he considers the dilemmas of Pakistani people in the United Kingdom. Some keep themselves to themselves and create a little Pakistan in their houses, work and worshipping places. Some, like the poet, venture forth and encounter prejudice and abuse. He cannot find his place anywhere, and in the final poem gives full expression to his anguish over the situation in which he finds himself:

If I take the chance
And sever my roots
Will they grow
In the warmth of your white arms?
Does the fear in my face show?

What do I do now that I
Am hung upside down over grey
Muddled space? My feet are roped
Into family blood. My arms have
Grown wings and I just hang, limp,
Swaying between two worlds.

(from Skimming the Soul Arc Publications)

About shaping work (from the second section)

Spontaneity, jotting down whatever suggests itself, allowing your imagination to take off, are all-important as you find your way into subject matter. If you try to control and organize what you are writing at this point you may fail to reach the heart of what you really want to explore. The first step in taking writing further, therefore, is very likely to be extending your material – maybe by making more use of the techniques we have described in the last three chapters or simply by writing further notes. When you feel ready to develop a piece of finished work then it is time to think about where it should begin, how it should proceed and where it should end – in other words to consider the structure which will bind it together.

Sometimes there is a straightforward narrative thread which makes shaping comparatively easy but often it is not obvious how to sort out material, how to decide what should or shouldn’t be included in a poem, short autobiographical piece or story. What we call the hook technique can be very useful to have in mind as you sort out ideas. Consciously or unconsciously most successful short poems are built round a hook  – that is they have a central idea or image which holds the poem together and all the material is in some way hooked onto it. (This is followed by the poem Scissors by Gill McEvoy (The Plucking Shed, Cinnamon 2010) and her comment about the poem.)

‘I would like to say what an amazing resource Writing Your Self is – so rich, so varied, so well researched and referenced. The examples are powerful and well chosen. The book as a whole is authoritative, compassionate and utterly convincing. New writers (and not-so-new writers) will have a sense of being taken by the hand and guided by wise friends.’
Dr Maggie Butt, on Continuum’s leaflet about the book.

This is certainly a forceful book… it is in two parts.  The first covers a wide range of human experiences (e.g. childhood, adult relationships, abuse, illness, identity) with examples of both raw and finished writing from a diverse selection of writers, some well-known some less so.  The second part deals with techniques, of which there are many examples, followed by a wonderful abundance of really stimulating exercises to work through. It concludes with an enlightening section which discusses the differences between raw and finished work and suggests various approaches.
All of this makes it not only an ideal book for anyone wishing to transform their own personal material into powerful writing, but also a valuable resource for teachers of creative writing and, indeed, for anyone who facilitates writing workshops. The bibliography is excellent and is itself a useful resource, as are the suggestions for further reading.

The ability to produce powerful writing from one’s own personal material, however, is not the only outcome of reading this book – the book itself is an intensely rich, fascinating (sometimes to the point of transfixing) and disturbing read. The many authors who have contributed to Writing Your Self include well-known names such as Vicki Feaver, Katharine Gallagher, Grevel Lindop, Pascale Petit, Penelope Shuttle and Matt Simpson. All of the contributors, including of course Schneider and Killick themselves, have written movingly and revealingly about various aspects of their lives and experiences and have shown how they have transformed their material into something rich and strange. Writing Your Self is a definitive book for exploring personal literature and life writing.
Hilary Mellon, in Ink Sweat and Tears