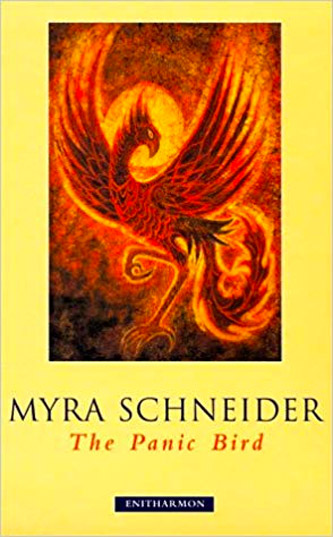 The theme in this 1998 collection is finding the self, uncovering and accepting the past, experiencing the present fully. The poems are presented as stories, inner myths and thoughts set off by a photograph, a fantasy in a bath, an address to a dragonfly, the recreation of a walk in Madeira and an extraordinary evening in Trinidad. The long narrative in the middle of the book traces the effects of dramatic events and difficult situations on the main characters.

Don’t be fooled by the shower,
its snake head acting dead until a sizzling tongue delivers
a baptism of scald.
But this is a religion of extremes.
You are pelted with cold scooped from Polar Caps,
your cage is drummed by a tribe of tropical beetles.
Stung into St. Vitus’s dance you soon slip on the molten soap
and with purple petalling your elbow
escape to the towel’s dry safety.

Give me that quieter creed – the nightly bath:
an instant solution for icicle feet, absolution from stress,
half an hour slumped in Roman Empire indolence
dunking toes in foam and dreaming of palms
on an island hemmed with ocean lace,
an experienced lover who croons to buttoned shoulders
and coaxes off the day’s tired clothing.
No use in a room where bald walls exhale December.
At its best when heat gushes through silver arteries,
and leafy shadows shift pinkly on gleaming tiles.
In this pacific pool you lose sight of intractibles
as water covers your grassy patches, laps over dunes,
trickles into clefts, whispers to the inner rivers,
allows the timid self.
You lie watching anklets of liquid light, the far-reaching brush,
the slap-happy crab-coloured flannel, wrists and legs
co-operating without an agenda more amicably, more effectively
than any club committee, political party or group of nations.
And by this route you sail,
immaculate as Venus on her shell,
towards the coast which is tomorrow.

April, and we’re not in England

with shut skies,
streaming roads, pavements squared off,
unimaginative, compassionless attitudes.
April, and I’m not crossing words out
or feeding them into mouthpieces of phones
or trying to funnel meanings
to someone whose speech was destroyed

at a stroke
and most of her understanding,
who now keeps chalking the air
with wild messages I can’t decode.

Footloose on the day’s long track

and high up,
the sun licking our sunhats, bare arms,
we sniff sweet peas and eucalyptus,
pick cow parsley twined with cactus,
pass through leafshadow beneath trees
tall as telegraph poles.

Suddenly we come upon the levada.
A limp old man, back umbered
by the weather, is dipping a bucket
in the shallow silver

of its water.
His large Alsatian runs to and fro

squandering energy.
I utter my single word of Portuguese.
His eyes flick over our absurd clothes
and wicker picnic basket.
The earth flaked by heat, his arms
doggedly raising the small black bucket