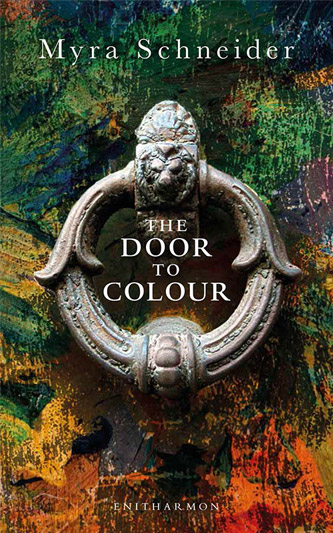 The Door to Colour

Myra Schneider’s new collection brings a fresh sense of reality to some well-kown images. Colour is the keynote of the book, moving through Matisse, Hockney, Chagall: sound too, in Mahler and Beethoven.

Often we find skin-deep assumptions turned around: the gold of ancient Crete is not its jewellery but olives: a postbox’s bright exterior conceals menace: a major twentieth-century poet only started painting by chance at the age of twenty; and the long poem Minotaur makes it clear that the Minotaur is not monster, Theseus no hero.

Myra Schneider’s tenth collection is worth getting hold of if you like your poetry emotionally vulnerable, richly allusive and superbly poised between past and present.’ Poetry London

my son brought me from Thailand is magenta,
a royal marriage of violet and pink.
When I lay it on my bed over the quilt
from India it becomes an extra skin,
one that’s kind to my uncomfortable body.

How I love its minute gold elephants, each
the size of the top segment of my little finger.
They walk in perfect lines, head to tail,
along the embroidered roads of the fabric
and when I stroke one an elephant god appears,

becomes the memory of riding in a high place
on a huge blur of animal, becomes the elephants
living in Mimi’s flat. My son has elaborated
on the heat in Thailand but here winter is trying
to sneak into the house and steal its warmth.

I creep into bed, invite the elephants to tiptoe
across my body’s pathways. When snowflakes
begin to float whitely down I close my eyes
and they melt into the soft purplish mystery
of nothing where I wish pain, all pain to vanish.

Acknowledge to The Door to Colour Enitharmon Press 2014

“Your Door to Colour is a beautiful book, your best, or maybe I should say, your most personally satisfying and moving to me among those I’ve read. I sat down to read it an hour or so ago and kept on reading, entranced… they maintain a voice that dissolves life into dream that couldn’t be prose, has to be poetry. If I were to say which poems I liked most, I would have to say, Kaleidoscope, Seeing into Things and Finding Silence. But I really responded, I think, to my sense of your presence, present in all of them.”
Anne Stevenson

“Schneider celebrates transcendence, but recognises it can only be experienced briefly. Her poems are illuminated by dreams, often unannounced… With its celebration of energy and its frank explorations of age, with its amber, purple and silvergold Myra Schneider’s The Door to Colour is a book for all seasons.”
Alison Brackenbury

“I loved the consistency and quality of the praise in the poems, and I found it to be so continually heartfelt. I felt too that this heartfelt-ness was putting pressure on the language and the form of the poems in the best possible way. The book feels to me like the deserved culmination of a lifetime’s work, Myra Schneider’s best book, which is saying a lot.”
Mark Roper, English poet who lives near Waterford in Ireland

‘This book is a cause for celebration, Myra Schneider’s first full collection in six years, a sustained meditation first on colour, and then on the self. The sheer energy and animation of the language is remarkable: “…Go into/the garden where dandelions pit themselves/against primroses…” she writes inGarden, or “At last the rain has ceased so open/the back door and go down the steps”, also Garden, or “But when winter pelted me with rain and bullied me with winds” in Minotaur.’
Lance Lee, Californian poet