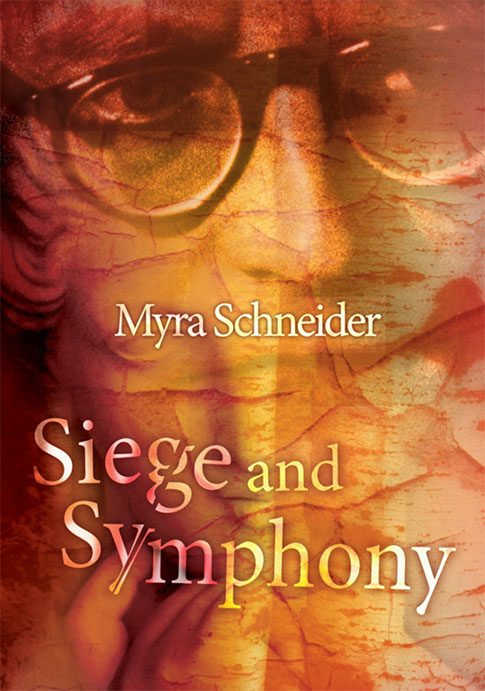 The theme of the book is celebration and endurance. The first section is devoted to poems about the planet and its present state. The second and third sections include poems about contemporary issues such as homelessness, also poems about women and personal poems.

All profits from the book are going to The Woodland Trust.

Myra Schneider already has fifteen collections of poetry to her name (plus several prose works and collaborations) and the poetry is still flowing as easily and fluently as it ever did, coloured by a fierce optimism and a joyful engagement with life. Such optimism and joy may not necessarily be “fashionable”, but Schneider is less interested in poetic fashions than speaking her own truth. Central to this new collection is her preoccupation with the plight of our natural world, as the dedication “For Planet Earth” makes abundantly clear. What is also clear is Schneider’s refusal to despair. The poems, like the poet herself, are driven by an unstoppable energy.

Siege and Symphony by Myra Schneider (Second Light) ends with a long poem detailing the creation of Shostakovich’s Symphony No. 7 during the siege of Leningrad. This poem consumes, in its form, an important moment in European history that is rarely talked about in British recollections of World War 2. Schneider depicts great art as spiritual sustenance whilst drawing readers into the recent siege of Aleppo. Schneider’s ability to capture a sense of the divine in the everyday makes many of the poems in this collection truly remarkable.

In this 16th collection, Myra Schneider’s voice is as fresh and original as ever. Here she explores many of the major issues of our time with honesty, directness, and occasional touches of humour. She has a wonderful talent for drawing us into the close, personal worlds that inhabit her poems, and creating a warm intimacy between herself and the reader. Schneider is also a master of the ekphrastic poem, and her precise, beautifully crafted pieces add vibrancy and new perspective to the work of artists such as Marianne North, Hokusai and Georgia O’Keeffe. The final part of the book is a real tour de force, showing Schneider at the height of her powers, and is a moving and utterly engrossing account of the creation of Shostakovich’s 7th Symphony. The book offers hope in a world of climate change, destruction of nature, homelessness and tragedy, showing us that resurgence is possible, and that ‘in spite of hungers, uprootings, in spite of losses / too deep to name, the will to live persists’ (Thrust). It’s an extraordinary achievement, and one that I will be reading for many years to come.

I am struck, first of all, by your detail.  You really notice things; you’re not (as many are), just setting down what you see. ‘Resurgence’ is surprising in its unexpected ending, not a dead sycamore but one so alive, so full determination, that it challenges the reader about what it is to be alive. And after that beginning I was hooked for the whole book. … all the poems seem to let the light in, or speak the truth, because they are really thought through  however difficult, or whatevertheir conclusion.

In Siege and Symphony there is not just artistic achievement, an urgent desire to communicate, writing which celebrates life in its many forms, but also powerful example and moral imperative.

The poems’ journey absorbs all the senses, a great gift to a season of difficult days… Myra Schneider’s poetry is the diary of the soul.

throw open splattered windows
and allow light to stream into rooms,
not shine dimmed to a sullen grey
by a skyful of cloud, not the mean rays
of reason which enumerate facts and faults,
kill compassion and make us hide fears
in cupboard dark, not bright beams
chilled by hatred with more bite
than the east wind –
none of these. Let us
open ourselves to today’s unstinting light.
It’s bringing the warmth of ripe apricot skins,
the happy go lucky orange of marigolds,
the clarity of extra virgin olive oil,
the glory of sun alighting on the waters
of Chania.
Look, it’s kindled the kitchen walls
and awakened cushions in the living room
so let us breathe – let us breathe it in
as it glides up the stairs, smiles
on worn carpets, calms worried beds.
Listen, it sounds like bees murmuring
to the rampant brambles out in the garden.

The sad paragraphs in the paper offer
no answers but they fade a little once I’m outside
although there’s rain in the air and the sudden sun
silvering naked twigs as I enter the park,
doesn’t last. I’m in the copse where rooks
are flapping in quarrel as usual, when it stops me
in my tracks: moss cushioning a fallen tree.
The green fabric is so vibrant it’s almost luminous.
It awakens grey branches and untidy brambles
emerging from clots of darkness. Hard to believe
this green is natural but no manmade process
could possibly create such soft brilliance.
It’s not water meadow green, not nettle green,
lime green, olive, not glossy laurel,
not intense Lorca green. It’s a green spawned
by the damp bedded in rotting logs and deep
leaf mush, a green that’s been so mothered
by light it banishes lightlessness, a green
more potent than the science which explains it,
a green which fills my mind, feeds my arteries,
a green that urges: never give up.

Silence is the cool as I enter leaving heat outside
like a heavy coat, the floor absorbing my footsteps
as I slip through layers finer than lawn, the scent
of summer flowers intense as the laying on of hands.
Silence is the higgle of mediaeval windows, names
on tablets of stone, each a reminder of transience.
Silence is the birds on an Anglo-Saxon cross,
their carved parrot beaks songless. It is profound.
But why am I here? I’m not a Christian. My belief
is in the force which rolls through all things:
the light still reaching us from the early universe,
darkness splitting apart to let morning to be born,
the will to survive stored in ovaries, loving
and giving, minds mastering the strange beauty
of mathematics, this poignant arch which rises
in the silence beyond the leaning walls of the nave.

A place that keeps belongings safe,
that shelters you from outside, its unclean air,
its gusts of ear-splitting music, the shove
of rush hour, its packs of pale faces
and the tousled man on the train who pulls
worn shoes from a bag, puts on a pair,
clacks his heels for a half a minute,
then pleads with passengers for money;
a place to sit savouring thoughts
and feelings, once a place you longed
to escape from – that chill dining room
where your parents’ anger with each other
erupted over meals until their words
and silences infected every mouthful,
tangled with the trees outside and hammered
on your head until you felt it would break;
a place to shrug off the past if it slips
out of the filing cabinet, to fill with colour:
a silver elephant on a red cushion and the purple
of aubergines; a place to jot sudden ideas.
But what of those with no room, not even
a bed, a shelf to call their own – that man,
on the train, his ludicrous dance, his body
unwashed, his hopeless life in his bag?

“Myra Schneider makes us aware of the capacity for humans either to unite and create communities or else to tear them down. It’s an apt collection for these times where humanity can save itself or let the climate crisis destroy it. Myra Schneider writes with compassion, urging readers to think about the consequences of their actions.”

“I’ve read and re-read the poems and enjoyed the range and your technical skill and varied themes. I love the fun and fantasy of poems such as. Your poems about the natural world are really lovely with fine detail from observation. Part 4 is epic, such a clever way of writing about Shostakovich interspersed with memories of your own.”

“I’ve been tremendously impressed with Siege and Symphony and send you warm congratulations on such a significant achievement. It’s more true of poets than of artists that in their maturity they get better and better: this is a good case in point. You have nothing to prove at this stage in your career, but you rise to the challenge of crafting a collection full of varied and memorable poems and concluding with a suitably resounding climax.”

“The title sequence is panoramic and very moving as well as informative. Research has paid off. But I wander among the earlier poems finding delights. This morning it was the child discovering she could read, and everything that went with it in that poem.”

“Many thanks for your gorgeous rich book – ideas flamboyant, finish perfect. I haven’t had time to read it all but the idea of siege and symphony is really geared to our times.”