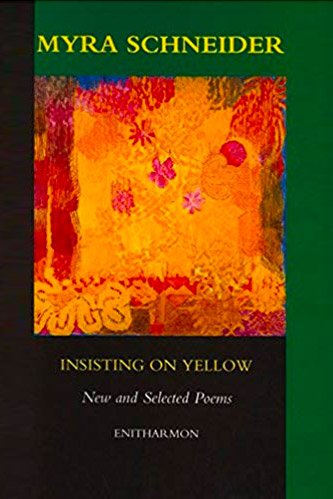 This book, published in 2000, includes most of the best poems from my collections published between 1984 and 1998 and it ends with a substantial section of new poems. Some of these investigate the need for love, others are visions or dreams. There is a sequence featuring parts of the body, a long poem about Esther Brunstein, a concentration survivor, and a popular poem exploring the very mixed character of my father: Soup and Slavery.

To Keep In Touch

you send a card and write in it
about yourself at twelve, the main casualty
in your parents’ battle for power.
I’m not sure how far
anyone can follow the difficult trail
through another’s wilderness
but your words bring us together for a while

as if we were the ones who’d sat
at the cloth on the front of the card, held
the small cups, left the peaches uneaten,
savoured the blue of the flowers lit
by globes floating from the vine
which mantles the courtyard, its white doors.

It looks as if that silky wrap would still hold
the wearer’s warmth but this is an evening
that was lived years before you or I were born.
I want to know what tendernesses, tensions
linked the people so tantalisingly
out of reach, can only tell
it was hot in this French garden
until the slipping sun let go
of roof, walls, paving-stones –

as hot as it was here in England
that summer when the touch of bedcovers,
another’s fingers, one’s own sticky flesh
on a chair were unbearable, when heat
tightened over my head and I dreamt
I wouldn’t tear it off before it smothered me.

For weeks that summer
a film unit camped on the cracked earth
in the park behind my house.
At the grey end of winter, the film:
a man who’d been silenced by his wife
in a semi full of white doors and carpet.
And a woman, his sister, in a terraced house
bulging with her emptiness.
She begged a cuddle, cried and cried
while he held her, hopelessly embarrassed.

And we, who were watching, shared
the helplessness, knew that she – most of us –
would never be touched enough
whatever words we shared, cards
we received or sent, however gently,
however generously arms cradled us.

A silky way cool as moon,
the stem on which head blooms,
kennel where the slippery tongue
is chained though it thrusts, licks,
roves, hates being held, a hole
mysterious as the tiger-lily’s bell,
deep as the place

I was taken
when I was five. Figures with half-
hidden faces laid me on a board.
Terrified, I fought a flannel pressed
to my mouth but melted into wavering
gymnasium bars

until I found myself
in a room, saw teddy in her best dress
had been thrown face down on the sill,
leapt up to save and hug my love.
My bright blood poured and poured
and for days food scraped my gullet.

I could make up a myth and say
it was then my throat’s golden prize
was snatched and my voice
disappeared.

The truth is different.
In the world of self I sang my way
down leafstrewn streets, acted out
stories where I began in rags,
ended in triumph. But in the country
ruled by don’t, must, ought,
I joined the band of children
whose voices shrank, hid away.

Years on it was hard to feel adult,
believe I could prise open
the box that holds weep and rage,
slide its catch to ask and argue,
laugh, persuade.

Throat, stay wide.
I want to reach down,
release my stream of sounds.