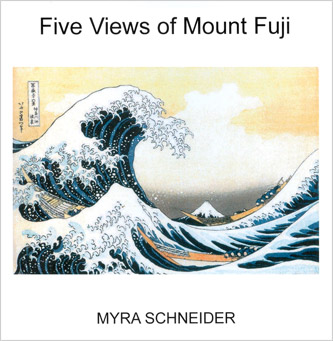 A sequence of poems which are personal responses to five of Hokusai’s prints and reproduction of each print on the facing page.

Profits from the sale of the pamphlet go to the Grenfell Foundation charity.

THE GREAT WAVE
after Hokusai

Magnificent as an emperor the wave rears up
and I gasp at the height, the extravagance
of its royal blue and foaming white, the roar

which outdoes a lion as it shapes a dragon
spewing spume far into the sky
to proclaim its success in dwarfing sacred Fuji,

its determination to dominate the world
once it’s devoured the many-headed worms
slithering between the lower snowy peaks.

and are joking as they race one another
to the shore to start selling the day’s catch.
The wave is huge but to mighty Fuji,

which in the distance appears tiny, it’s less
than a grasshopper, a raindrop, a speckle.
I relax and wait for the immense crest,

all the pomp and circumstance it carries,
to collapse, aware that Fuji who has overseen
humankind for millennia, Fuji will endure.

There are only five (poems), but the journey through them seems longer. In a good way. You take your time and savour. Which is just what the poet seems to have done, as she’s imagined herself, I think, stepping into each print.   Charlotte Gann Sphinx OPOI Reviews

(Myra Schneider) expresses her excitement on studying five of Katsushika Hokusai’s vibrant woodblock prints of Mount Fuji, and pins down for us the stimulus to thought, sense of triumph, and even triumph over the odds one artist can gift to another. Hope emerges from despair at the problems of today’s world.

Dilys Wood, the blurb for the pamphlet.