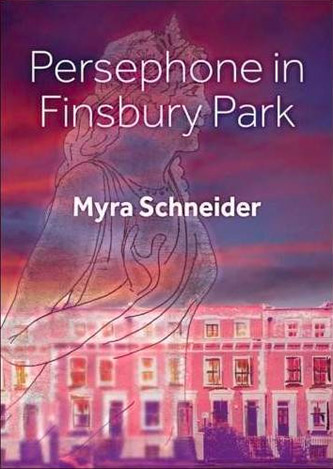 The poems move seamlessly between every day personal feelings of hope, anxiety, concern about the world we live in, to glowing visions of what might and back to reality. Women’s continuing struggle to achieve ‘identity’ is the theme of seven poems in the second part of the book including the narrative poem, Persephone in Finsbury Park, an updating of the Greek myth to a warm and serious contemporary story about Persi, the young heroine who becomes her own person.

Heaving her enormous bulk onto a bookshelf high
above my bed, then pushing until she was out of sight
took all my strength and it didn’t dislodge her from my mind.

But I rebelled against the weight of her disapproval,
shut myself away every morning in that small room
of my own, the room which is me, to let imagination

run wild as brambles and grasses in an untended garden,
coaxed visions into scribblings on paper until desk
and floor were littered, until unblinking as owl eyes,

words stared from my screen. Of course, the moment
I emerged I came face to face with her large a life
on the landing. For years this matron, large-bosomed

and with a voluminous knowledge gathered from decades
of managing a household, followed me around tutting
because I hadn’t blanched or basted, couldn’t pluck a duck.

She snorted at unruly children sliding down the stairs,
at dust rollicking along skirting boards, rounded on me
for failing to keep a properly stocked linen cupboard.

Then the day I found out this paragon was Isabella Beeton,
a young woman who instead of devoting her life to home
and family like other Victorian wives, travelled by train

with her publisher husband to his London office, wrote
books fat with information, mostly magpied from other books,
about household management, became a money-spinner,

an authority for later generations. I also learnt she’d suffered
several miscarriages, bore two children who died in infancy,
two who survived, died herself after the second –

thanks to Mr Beeton’s syphilis. Yet for years books
in her name continued to appear. The matron’s ghost
still persists in my mind but what troubles me is Isabella.

For all the thousands of pages this woman produced
in her short life, the real Mrs Beeton didn’t leave
a single word about what she thought, felt, endured.

“Youthful exuberance and zest for life leap from the pages of this collection… Many of the starting points are reassuringly familiar: the minutiae of daily London life, the domestic fauna and flora. The way in which poems suddenly take wing is familiar too. But they always fly to unfamiliar places… A poem about the humble swede asks us to conceive a day when even this ungainly vegetable is an endangered species. The poems are rooted in the twenty-first century, never in the past…The book’s eponymous poem is a rollicking read to be devoured by all those whose hearts sink when confronted with a long poem.”
Justina Hart, in Artemispoetry

“This pamphlet is packed with colour and soul and a sense of the numinous in the common or everyday. Many of these poems are imbued with a joy in simple existence, leaving the reader enriched and more aware of the startling fact of simply being alive and in the world. Schneider is a sensory poet and the book is full of exquisite imagery, often inspired by the natural world, with the best poems lifting the reader into new and unexpected territories. The title poem is a tour-de-force exploring the dynamics of the mother-child relationship amongst other themes. It is highly readable, witty and I devoured it in one setting. For seasoned poetry readers and those new to the genre, I would highly recommend this collection.”
Sarah Westcott, review on Amazon books